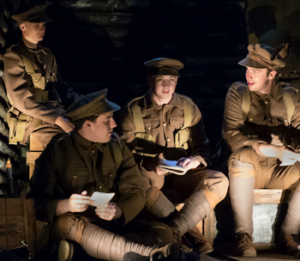 The End of the Journey was a promenade theatre piece based on WW1, written by Gillian Plowman, directed by Pamela Howard and performed by Arts Dream Selsey using local community talent and professional actors. The play made use of the connection between Selsey and R C Sherrif, who wrote Journey’s End partly at his Mother’s house in the towm. Sherriff took a keen interest in a late 1933 amateur production of his play, a hugely successful and influential West End hit of 1929, in this very theatre (now disused but cleared for this production).

The End of the Journey was performed in the Pavilion Theatre in Selsey during August 2014.

Gillian I loved your play. It was a moving and unique experience. I have never been to a promenade play. Everything about it was spot on.

The script was perfect, all the characters were believable, their dialogue really conveyed the very different life experiences they all had before they were thrown together in war. The women becoming ‘men’ for the duration, and doing the dual shift of work and home life. The officers, with no concept of the lives the regular soldiers would have lived. The soldiers, afraid but determined and a long way from the security of their home life and the lives they had thought they would be living, following their fathers in the fields or down the pit. Those that came back, were forever changed. All of that was conveyed as the play unfolded and the script told the story of life in the trenches.

I thought I knew a little about WW1, but I didn’t know about the rats, the horse manure, the dead bodies, somehow I thought all those things were taken care of and they only (!) had masses of mud to deal with. And I thought there was some sort of big masterplan for combat operations, but it was all chaotic and decisions were being made by officers who were either young and inexperienced, or older and from a different kind of warfare altogether.

The performances – what a cast. It was wonderful to see so many young faces, and they performed so well, everyone did. Truly professional performances from them all.

The set – weren’t the trenches deep. I suppose they had to be, I feel I got a sense of what it must have been like to spend hours in them, with the constant sound of gunfire. It was so imaginative, for the audience to be promenaded. From the opening scene I felt as if we were following the journey of the characters as they moved about us and we moved about them. The set was a masterpiece of design and execution. From the staggering piles of sandbags, to the rat that landed in my lap. I’d like to have looked at Sleepy Hollow, but I was the last one through so hurried up.

It was such a clever idea to end with the women dancing alone. It made sense of the Roaring 20s, so many men gone. I realised why
a) there was a fashion for some women to dress like men,
b) why that time saw a social revolution as they tried to forget the past, who would want to remember what they or their families had gone through and
c) the frustration of women who had stepped into fill jobs only to be sent back to the kitchen when men did return. Of course many women forged a way into work, determined to have a career, but many were denied the chance.

Both Gill and I had a few tears as the story unfolded.

What a joy to experience, and to see The Pavilion come alive in such a way. I do hope it paves the way for many more productions at The Pavilion.

Congratulations, I thought it was brilliant, very powerful and moving. Amazing use of the space

Just got back into the dry after tonight’s performance. It was so worth getting wet for! Many thanks and congratulations to all concerned for a great and moving experience.

I really loved The End of the Journey – I thought it was a complete triumph. To begin with, the transformation of the space was wonderful and the attention to detail quite astonishing. I felt that the play really worked and propelled us very quickly into the heart of matters, making it both a compelling experience to watch and also an intimate one with commitment, focus and dignity. There was a simplicity and directness about the play, which couldn’t fail to move – especially when the young men were encouraging each other to write letters. The final dance scene was inspired and actually the most moving part of the whole. I loved watching those girls stand so still and concentrated and then move into a touching waltz when the audience had settled. One of the best things I’ve seen for a long time.

We were most impressed by the structure of the play – cleverly using the different bits of the building & culminating with jolly (although still poignant) musical finale.

A treat, even though it was hugely sad and devastating. I had read a lot on the WW1 AND taken grandchildren to the Imperial War Museum, nonetheless your production was the one that brought it home in reality. Your production was so much more authentic than Journey’s End itself. What a pity it cannot come to a London Theatre at some time – albeit I can see that the roving audience was a terrific experience that added a lot of authenticity in different spaces.

A friend of mine – a big, burly, hard drinking tiler – said he was so moved by the show he had to sit down for an hour afterwards to recover from the emotion it brought out in him.

Congratulations on your production of The End of the Journey – I thought it was absolutely wonderful – powerful, moving, profound, funny! The installation was genius – I can only begin to imagine just how much hard work you must have had to put in – absolutely brilliant!

Everybody who saw The End of the Journey agreed that it was wonderful. It gave a balanced insight into all aspects of WW1 that will be etched on all our memories. It was riveting throughout, but for me, the emotion and poignancy of that last scene will remain forever. That one-hour production summed up the whole tragedy, which affected that entire generation.

I just wanted to say after all your hard work and creativity that we thought the drama was an absolute triumph and incredibly moving. The space worked wonderfully well and I cannot imagine anything putting Selsey on the map better than your production